The Dormition and Assumption of the Mother of God

The 30 of us pilgrims have just returned from the Holy Land where we were able to visit many of the places where events of our Lord’s life and of his Blessed Mother’s life took place. One special one was the Cenacle and alongside it the church of the Dormition (we actually couldn’t enter the Dormition church this time due to construction, but we saw it from the outside). 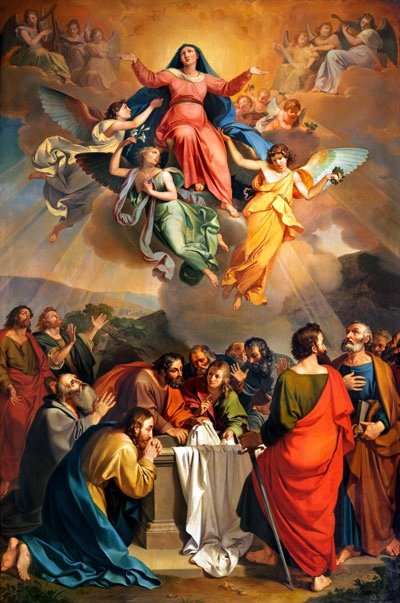 We know that St. John the Apostle took care of Mary, the Mother of God, after our Lord’s Ascension. St. John remained in Jerusalem with Mary until Herod’s persecution, detailed in Acts 12:1-3. Then St. John took the Virgin Mary with him to Ephesus. Yet the two returned to Jerusalem after the death of Herod and supported the Church as she grew in number and extension. Likely she was back there with John at the Council of Jerusalem in the year 50, described in Acts 15.

In Jerusalem, Mary often would do the Way of the Cross and pray in front of the Holy Sepulchre as a way of uniting herself to her son. This reinforced her desire to be like him in dying for love. The Eastern churches celebrate the feast of Mary’s Dormition, describing the fulfillment of her desire to die with Christ more like falling asleep than as dying.

Church Fathers and sacred writers, beginning in the second century with Bishop St. Melito of Sardis (who died around AD 200), give us details of Our Lady’s Dormition and Assumption. These traditions tell us that Mary, knowing she was about to leave this world, called together the Apostles, except St. James who had been martyred.

The apostles (except for St. Thomas, who had yet to arrive from distant India) all gathered around Mary while she laid on her bed. As she gave them encouragement in their apostolic endeavors, Jesus appeared to her. She look up and said his name. Then she closed her eyes, entrusted her soul to her son, and breathed her last.

Large crowds of faithful gathered around Mary’s body as the apostles carried the funeral bier in solemn procession from the house of the Dormition on Mount Zion to the tomb just a stone’s throw north of Gethsemane. As they carried her bier up the Kidron Valley (Valley of Josaphat), a Jewish priest named Athonios was filled with anger and jealousy, and tried to topple the bier with the body of the Mother of God. When Athonios touched the bier with his two hands; an angel cut off both hands instantaneously. Repenting of his misdeed and declaring the greatness of God and of Mary, he was healed.

They arrived at the tomb near the Garden of Gethsemane, in the same plot where her parents Joachim and Anna were buried. Upon sealing the tomb, many of the Christian faithful remained outside praying, some described hearing the sound of angels singing, which is associated with Mary’s Assumption and the source of her title: St. Mary of the Angels!

Tradition has it that St. Thomas arrived to Jerusalem from India three days later and was quite disappointed that he had not been able to accompany Mary in her last moments. So the apostles took St. Thomas to Mary’s tomb where he prostrated himself. Opening the tomb for him they found it empty except for the burial clothes that had wrapped Our Lady’s body; again celestial music could be heard.

Mary’s Assumption reaffirms our faith in the resurrection of the body, giving us hope in eternal life with Christ, and with our heavenly Mother, in heaven.