May: the Month of the Most Holy One 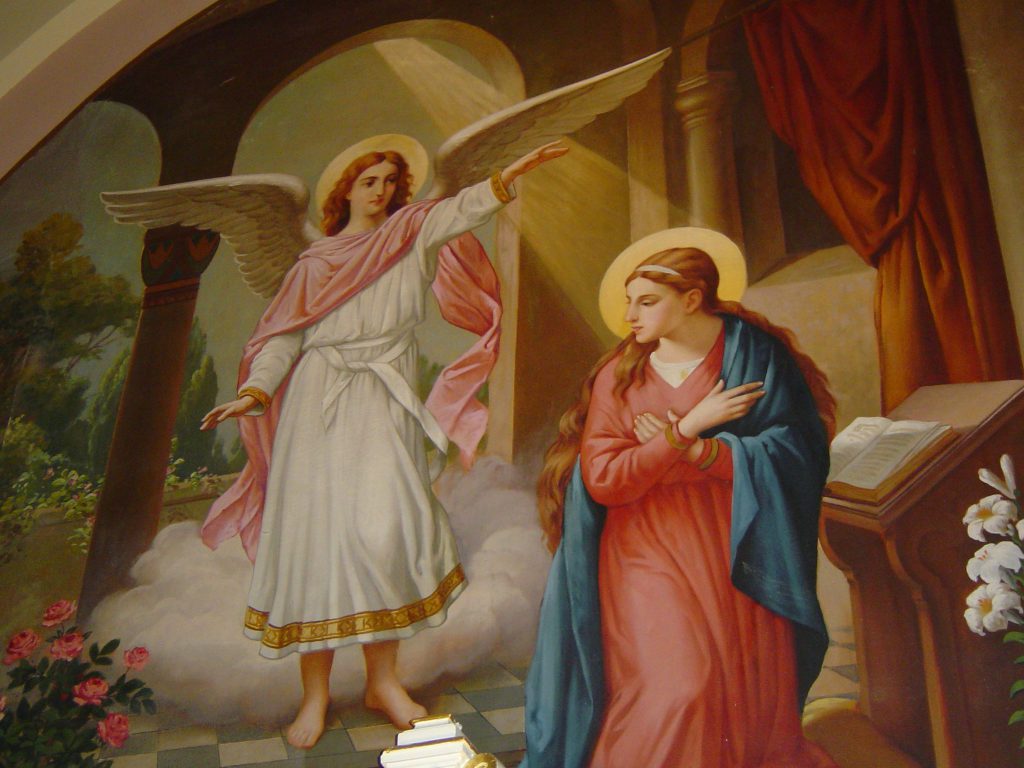 The month of May is dedicated to Mary, the Handmaid of the Lord (Luke 1:38). The angel Gabriel had told Mary that “The Holy Spirit will come upon you, and the power of the Most High will overshadow you; therefore the child will be born in a holy manner, the Son of God,” (Luke 1:35). Gabriel also told her: “He will be great… the Son of the Most High… and he will reign over the house of Jacob forever; and his kingdom will have no end” (Luke 1:33-34). In other words, Mary you are mother of the great Messiah, the mother of God!

What was Mary’s response? “Behold the handmaid of the Lord.” This was her intimate identity, God’s lowly handmaid. Mary is the most holy one because she is the most lowly one. She is great because she is God’s servant, chosen by him to be his mother. Mary’s lowliness wonderfully anticipates her son:

“Who, though he was in the form of God, did not count equality with God a thing to be clung to, but emptied himself, taking the form of a servant, being born in the likeness of men. And being found in human form he humbled himself and became obedient unto death, even death on a cross. Therefore God has highly exalted him and bestowed on him the name which is above every name, that at the name of Jesus every knee should bow, in heaven and on earth and under the earth, and every tongue confess that Jesus Christ is Lord, to the glory of God the Father” (Philippians 2:6-11).

When Paul says that Jesus takes on “form of a servant” he uses the Greek term, doulos. Doulos becomes his identity. Mary identifies herself by the feminine form of servant, doule, the lowly handmaid of the Lord. For both Mary and Jesus to be lowly makes is to be holy because their identity is fully in relation to God the Father. Mary is God’s lowly servant; God “has regarded the low estate of his handmaiden. For behold, henceforth all generations will call [her] blessed” (Luke 1:48); she is holy and blessed by all generation because she is lowly. Likewise, as Jesus emptied himself to become doulos, servant, “God has highly exalted him… and every tongue [shall] confess that Jesus Christ is Lord, to the glory of God the Father.” Jesus manifested his identity by his glorification on the cross (see John 7:39; 12:15,23; 13:31-32).

What is your identity… on what is it based? On a title—such as “pastor”—or on your position at work? On your proficiency: “I’m the number one soccer player at my school… or I’m the smartest in my class”? Is your value based on how beautiful you are… how attractive you are… how nice you are…? Instead, let’s follow Our Lady’s example and open ourselves to true holiness by being lowly, doulos. Let’s learn to serve like Mary did!

Certainly the Virgin Mary was beautiful, kind, and intelligent—she was more intelligent that Albert Einstein!—but what made her great, what made her holy, was her relationship with God. Mary was the handmaid of the Lord, the Father’s precious daughter; she became God’s holy Temple of the Holy Spirit and Mother of God. Mary made no great scientific discoveries—although she could have; she wrote no great works of literature; she built no great architectural gems nor was ever a great stateswoman or diplomat. No, what made Mary great was her virginal love—the singular orientation of her whole being—body and soul—toward her Triune Love. Mary was a housewife who cleaned house, washed clothes, prepared meals, and cleaned dishes. But she did all that for love: she made her house welcoming and pleasant for Jesus (and Joseph); the laundry was always clean and neat because Jesus would wear those clothes; she prepared appetizing meals because Jesus would eat them. Everything she did she did for love… this is what made Mary great!

Invoke the great Lady—Oh the most lowly one, the most holy one: teach us to love with a love that gives itself away… so we can be great too!