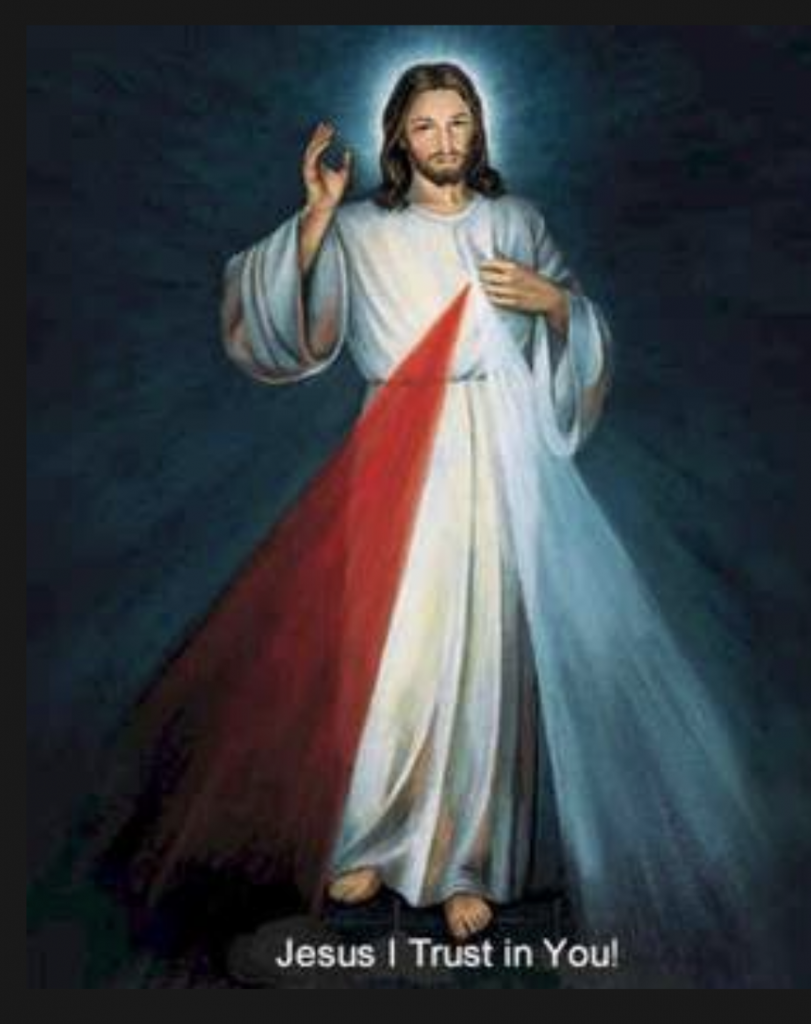 Today we celebrate Divine Mercy Sunday. This devotion was promoted by St. Faustina and promulgated by John Paul II in the year 2000, when he canonized Sr. Faustina. Yet this devotion also has profound link to St. Josemaría, the founder of Opus Dei.
St. Josemaría encouraged people to have some devotions, but not too many. As he wrote: “Have only a few private devotions, but be constant in them” (The Way, 552). One that he had—of which few people ever knew or heard—was the private devotion to the Merciful Love.

The Merciful Love was a devotion that arose during the First World War from the mystical experience of a French nun, Sister Maria Teresa Desandais. The nun had an image painted of her vision on which the devotion is based. The image shows Jesus on the Cross enveloped by the Eucharistic host; his eyes are serene and opened; his exposed heart is emanating flames that form the word, “caritas.” Sr. Maria Teresa died in during the Second World War.

In Poland, Sr. Faustina Kowalska received a similar vision of our Lord under the title of Divine Mercy. She too had a painting commissioned. She saw our Lord standing with rays emanating from Christ’s wounded heart, the fount from which God’s mercy flow. Our Lord asked that a feast in honor of Divine Mercy be established for the Sunday after Easter, which Pope John Paul II did in the year 2000.

The Church doesn’t require Catholics to practice either of these devotions, which is likely why St. Josemaría kept his so private: it was not are required part of the spirit of Opus Dei. The chief message of both devotions is that God is rich in mercy, not a mean, exacting ogre looking for an excuse to condemn us to hell. No. “For God sent the Son into the world, not to condemn the world, but that the world might be saved through him” (John 3:17). God is the merciful father who runs out to meet us, His prodigal sons and daughters, giving us a passionate embrace and restoring our sonship to the full (Luke 15:11-32). He shows us his infinite love for us by sending his most precious son to suffer and die on the Cross (John 3:14-21). St. John Paul II said:

“There is nothing that man needs more than Divine Mercy—that love which is benevolent, which is compassionate, which raises man above his weakness to the infinite heights of the holiness of God…  It is a message that is clear and understandable for everyone. Anyone can come here, look at this image of the merciful Jesus, His Heart radiating grace…: ‘Fear nothing. I am with you always’ (Diary, 586). And if this person responds with a sincere heart: ‘Jesus, I trust in you,’ he will find comfort in all his anxieties and fears…
Divine Mercy! This is the Easter gift that the Church receives from the risen Christ and offers to humanity at the dawn of the third millennium.”

Our Lord told Sr. Faustina that: “The soul that will go to Confession and receive Holy Communion will obtain complete forgiveness of sins and punishment” (Diary, 699). To obtain this mercy, we too need to: “Be merciful, even as your Father is merciful” (Luke 6:36), since the unmerciful soul will not be forgiven (cf. Matthew 18:23-35). Therefore, we need to forgive all those who have hurt us in any way.

Then we can say with St. Josemaría: “Cheerfulness is a necessary consequence… of knowing that our Father God loves us with a predilect love that he holds us up and helps us and forgives us” (The Forge, 332). Let’s encourage our friends and family to trust in the risen Lord, abandoning their anxieties to him so as to experience this Easter joy. They will not be disappointed.