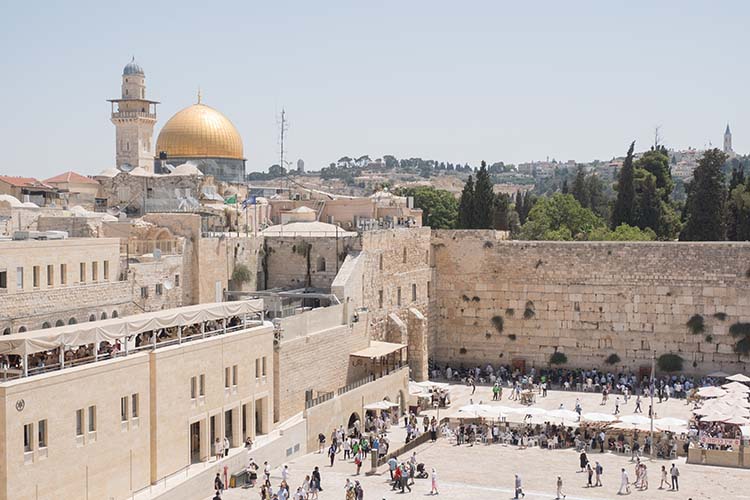 Photo by Anton Mislawsky on Unsplash

St. Mary of the Angels Holy Land Pilgrimage – July 25 – August 6, 2022
We left O’Hare Airport on Monday, July 25. The plane was suppose to leave around 9:30 pm, but it was almost midnight by the time we were airborne. We arrived in Tel Aviv as the sun was still up, our bus ride to Nazareth began at dusk and we arrived in the evening to a quick dinner and Holy Mass in the Golden Crown Hotel.

We traveled from Nazareth to Caesarea Maritime on the Mediterranean to see Herod’s Palace, where St. Paul was imprisoned. From there we traveled north along to the coast Haifa, to Stella Maris Convent where Elijah’s cave is.

We took our bus from Nazareth and headed north to Caesarea Philippi, where St. Peter made his profession of faith in Jesus as the Christ, the Son of God. We spent a good deal of time here before heading down to Mount Tabor. We had lunch at the base of the mountain and then headed to the top in vans. There we toured the church and had Mass.

Finally, we returned to Nazareth and went to the Mount of Precipice where townsfolk and relatives of Jesus tried to throw him down to kill him. This was just a short distance from our hotel.

We took the bus over the hill to Cana where Jesus worked his first miracle of turning water into wine. Married couples on the pilgrimage renewed there vows at Holy Mass there. From there we continued north the Mount of Beatitudes on the hills overlooking the Sea of Galillea. We had lunch of Peter’s fish (talapia) and took a boat ride on the lake. Then we went to Tabgha (Peter’s Primacy) but we missed going in as they changed the closing time on us. Finally we went to Capernaum where Peter lived and Jesus stayed many times.

We backed our bags and left Nazareth, heading down the Jordan River Valley, with dates and palm trees galor. We went to the site of the Baptism of Jesus by John, avoiding crossing fenses where live mines still exist. From there we went to Jericho, say Zacheus’ Tree and the Mount of Temptation. We stopped for camel rides and then went to the Church of the Good Shepherd for Mass. After lunch we headed up the mountain (from below sea level) to Jerusalem and then to Bethlehem were we established our new residence at Hotel St. Gabriel. 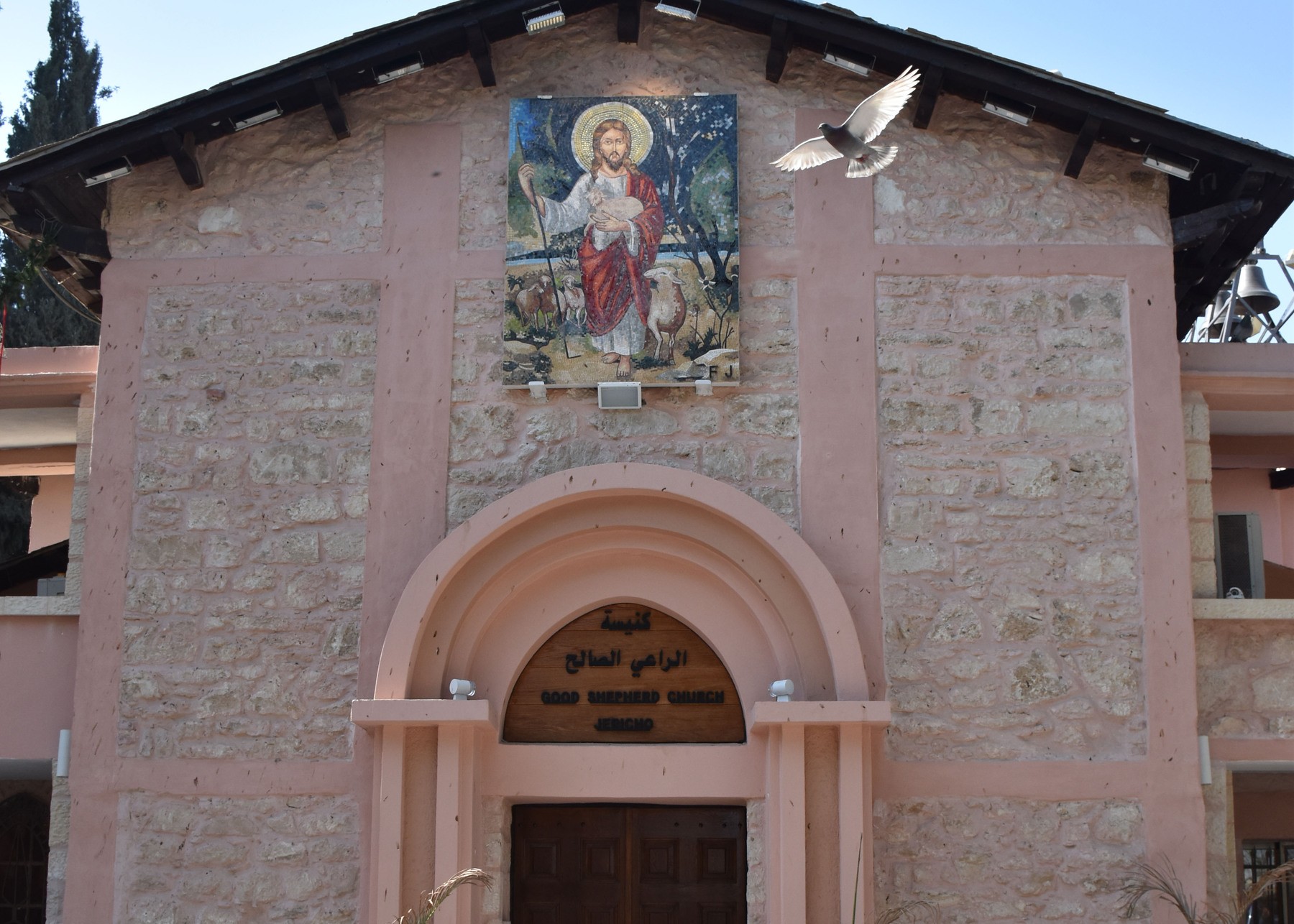 Church of the Good Shepherd, Jericho 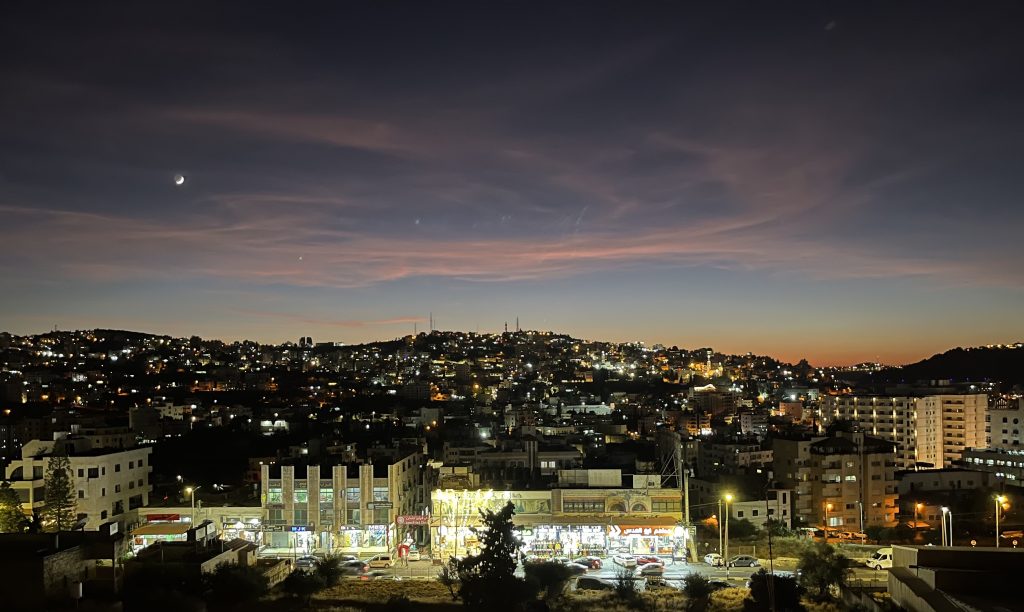 Bethlehem, from the balcony of Hotel St. Gabriel at sunset

We left Bethlehem and headed to Ein Karem where we prayed the Rosary as we climbed up the hill to the Visitation Church, where we celebrated Mass. On the way down we stopped off at a convent of St. Maria Alphonsine, the foundress of the Sisters of the Rosary. From there we went to the caves of Qumran where Dead Sea Scrolls were discovered. Finally we went to the Dead Sea itself, where many took a dip and became unrecognizeably young again (before and after pictures not included).

Again we headed to Ein Karem to have Mass in the church over the site of John the Baptist’s Birthplace and where he was hidden from Herod’s soldiers who came to slaughter him as well as the  Holy Innocents. From there we went to the Israeli Museum where we saw the giant Model of Jerusalem and the Shrine of the Book. We had lunch and then went to St. Ann’s Church and Pool of Bethsaida and the Western Wall (whaling Wall) before returning the our hotel in Bethlehem.

Tuesday, August 2, Feast of St. Mary of the Angels

Today we went to the Milk Grotto, where the Virgin Mary nursed the baby Jesus escaping Herod’s persecution, then we went to the church of the Nativity were we had Mass in St. Jerome’s cave and the church of Catherine of Alexandria. We had lunch in various homes of Bethlehem Christians and then went to the Shepherd’s Fields in Beit Sahour. Finally we went to the Carmelite monastery in Bethlehem where we learned about St. Miriam of Christ Crucified and we had some newly enrolled in the scapular.

We packed our bags and got into the bus that took us to the Mount of Olives. There we passed the Muslim controlled chapel of the Ascension of Christ and enter the Pater Noster church, where our Lord would gather his apostles and teach them, including the Our Father and how to pray. We walked down from the top of the Mount of Olives and came to Dominus Flevit church where Jesus cried over Jerusalem. We continued down to the Garden of Gethsemane where had Mass on the rock of our Lord’s agony in the garden. After Mass we visited the tomb of Mary where she was assumed into heaven (we did not go in).

After lunch we went to the church of Mary’s Dormition (which was under construction) then to the Cenacle where our Lord celebrated the Last Supper and where Pentecost occurred. Fr. John gave us a meditation on the Holy Mass. Then we walked down the hill to the house of the high priest, Caiphas, where now is built the church of St. Peter in Galicantu. From there we went to our new hotel, Notre Dame.

Thursday, August 4, Feast of the Cure of Ars

We left the hotel early, 6:00 AM, and walked to the beginning of the Via Dolorosa where we began the Way of the Cross. As we entered the church of the Holy Sepulchre we finished the last stations at the preparation stone before we went up the stairs to Calvary and where we could touch the hole in the stone where the Christ’s cross was placed. We also visited the tomb Joseph of Arimathea, the chapel of St. Helena (the pit where the crosses were thrown after use), and the chapel of the skull (of Adam). Then we had Holy Mass in the Edicule, in the site of our Lord’s Resurrection. Elena there made her First Holy Communion.

After we returned to the hotel, we had a late breakfast and we were on our own for the rest of the day until our last celebration dinner in Bethlehem.

We started off goin to Bethany and house or tomb of Lazarus. From there we took the road to Emmaus and to the Saxum Visitor Center  where we had a virtual tour of all the places we visited and where Fr. John celebrated Holy Mass. We also visited the shrine of Our Lady Queen of Palestine, before collecting our bags, having a dinner at Notre Dame, and heading to the airport for our return to Chicago.