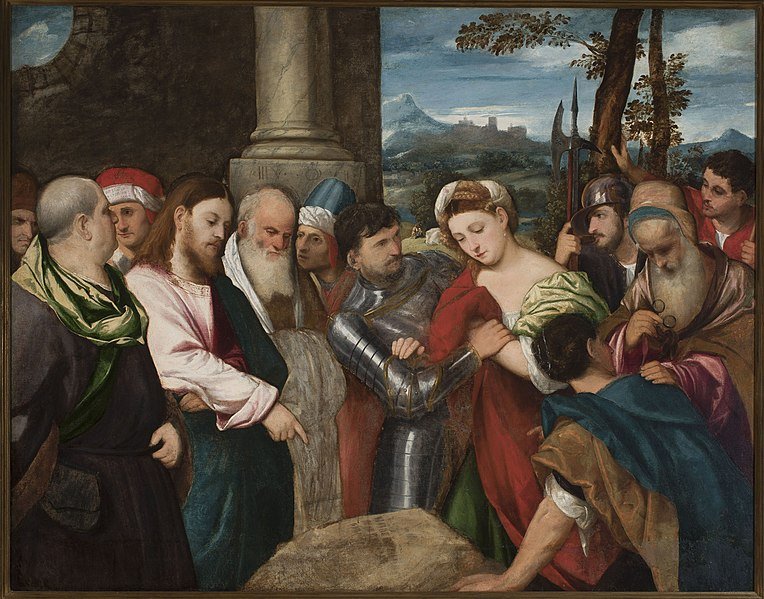 The Jewish authorities often challenged Jesus, yet he encouraged us to respect them and all legitimate authority. For example, when the Scribes and Pharisees try to trap our Lord, dragging before him a woman they catch in adultery to challenge Jesus: should we obey the Law, which commanded good Jews too stone such persons, or obey the Roman law, which forbids us from putting anyone to death without their authorization. Jesus maintained respect for the Law and Roman law, while showing mercy towards the woman, saying: “Let him who is without sin among you be the first to throw a stone at her” (John 8:7). They all turned away and left Jesus alone with the woman because they were afraid of Romans authority which they did not respect.

Again, the Scribes and Pharisees try to trap Jesus, asking him whether Jews should pay the unpopular tax to Cesar. Jesus asked to see the coin used to pay the tax: “And they brought him a coin. Then Jesus said, ‘Whose likeness and inscription is this?’ They answered, ‘Caesar’s.’ Then he said to them, ‘Render therefore to Caesar the things that are Caesar’s, and to God the things that are God’s’” (Matthew 22:19-21).

So, God calls upon Christians to support, respect, and obey civic authority in things relating to society’s common good, yet to render to God the things that are God’s, that is, total love and fidelity to him as the source and ultimate end of our existence. As St. Paul states so clearly:

“Let every person be subject to the governing authorities. For there is no authority except from God, and those that exist have been instituted by God. So he who resists the authorities resists what God has appointed, and those who resist will incur judgment… For the same reason pay taxes too, for authorities are God’s ministers, attending to this very thing. Pay all of them their dues, taxes to whom taxes are due, revenue to whom revenue is due, respect to whom respect is due, honor to whom honor is due” (Romans 13:1-2, 6-7)

Even when Pilate was to unjustly condemn him to death, Jesus recognized Pilate’s authority over him in his humanity: “Jesus answered him, ‘You would have no power over me unless it had been given you from above; therefore he who delivered me to you has the greater sin’” (John 19:11).

First of all, then, I urge that supplications, prayers, intercessions, and thanksgivings be made for all men, for kings and all who are in high positions, that we may lead a quiet and peaceable life, godly and respectful in every way. This is good, and it is acceptable in the sight of God our Savior, who desires all men to be saved and to come to the knowledge of the truth” (Timothy 2:1-4).

We must also respect and obey just laws. If a civic law goes against God’s law then God’s law supersedes man’s. When the Jewish authorities commanded the apostles not to teach Christ’s death and resurrection, “Peter and the apostles answered, ‘We must obey God rather than men. The God of our fathers raised Jesus whom you killed by hanging him on a tree… And we are witnesses to these things, and so is the Holy Spirit whom God has given to those who obey him’” (Acts 5:29-32). So, we must fight man’s law when it clearly goes against God’s law and against the common good of society. For example, obeying God must supersede laws that mandate doctors to perform abortions or that mandate priests and ministers to perform same-sex “marriages.”

CCC 465. When is a citizen forbidden to obey civil authorities? A citizen is obliged in conscience not to obey the laws of civil authorities when they are contrary to the demands of the moral order: “We must obey God rather than men” (Acts of the Apostles 5:29).

But God’s law is really oriented toward mercy. His laws mandating various religious practices and sacrifices were really about teaching us to love and show mercy: “For I desire steadfast love and not sacrifice, the knowledge of God, rather than burnt offering” (Hosea 6:6; see Matthew 12:1-8). It may seem that the religious person honors God by seeking him daily as if he were righteous and obedient to God’s ordinances. Yet God says: “Behold, you fast only to quarrel and to fight and to hit with wicked fist… Is not this the fast that I choose: to loose the bonds of wickedness, to undo the thongs of the yoke, to let the oppressed go free, and to break every yoke? Is it not to share your bread with the hungry, and bring the homeless poor into your house; when you see the naked, to cover him, and not to hide yourself from your own flesh?” (Isaiah 58:2-7).

So, the true way to honor God is not by a rigorous following of rules, but by having a merciful love of God with loving mercy toward the rest of God’s children. For this reason, “Blessed are the merciful: for they shall obtain mercy” (Matthew 5:7).