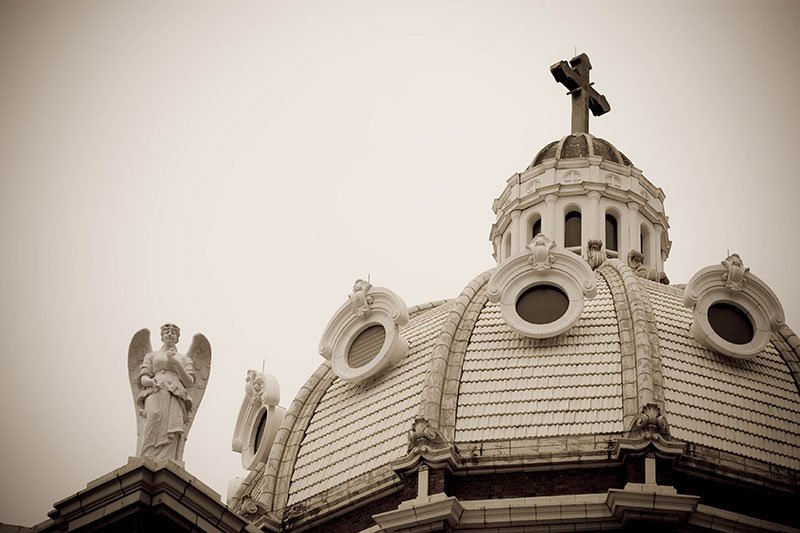 The history of St. Mary of the Angels is a history of faith that began with great pioneers of the Faith in our city and state. This should inspire us to think big, long-term, and consider how each one of us can contribute to the future of the Catholic Church where God has placed us.

In May 1673 French Jesuit, Fr. Jacques Marquette, and explorer Louis Jolliet traveled from Green Bay over to the Wisconsin River and then down the Mississippi River. Traveling down the Mississippi River the two came across Native Americans of the Illinois tribe and entered the Indian village called “peouarea” (Peoria). They continued down the Mississippi River until it met the Arkansas River, and then returned to Lake Michigan via the Illinois Rivers. The two arrived to the mouth of the Chicago River at Lake Michigan on December 4, 1674. Fr. Marquette recuperated in a small cabin they built before returning to mission of St. Francis Xavier in Green Bay, Wisconsin. That small cabin, where Fr. Marquette likely celebrated Holy Mass, was the first building of the future city of Chicago.

Before reaching the future location of Chicago Fr. Marquette and Jolliet came across a large village on the Illinois River of the Illinois tribe. The village was called Kaskasia. Fr. Marquette would return in 1674—as he promised the chieftains—to establish a mission among them and to share with them the Catholic Faith. Father Claude Allouez took over the mission from Fr. Marquette, who died in May 1675 at age 37.

The first Catholics to Chicago and its surroundings were French. Most were fur traders. In 1791 those of European decent in Illinois numbered only 1221. In the 1830s the Catholic population in Chicago was about 100. So Mark and Jean Baptiste Beaubien, who ran the Sauganash Hotel, decided to build the first Catholic Church in Chicago, calling it St. Mary’s (it was located near the corner of State and Lake streets). Mark Beaubien petitioned the bishop of St. Louis for a priest, and Fr. John St. Cyr was sent here and made pastor of St. Mary’s.

On November 28, 1843 Chicago was made a diocese with Bishop William J. Quarter has our first spiritual head. The first great wave of Catholic immigration came in 1846-48, when famine in Ireland brought many to Chicago. Bishop Quarter allowed each parish to keep its markedly ethnic identity. Although he would die in April 1848, Bishop Quarter ordained twenty-nine priests and built thirty churches.

In the 1850 U.S. Census, only 495 individuals (72 women) were counted of Polish origin in the whole United States. In ten years that number rose to 7,298; 309 here in Chicago. In 1864 Polish families formed the patronage of St. Stanislaus Kostka and bought land for a church—about a mile from St. Mary of the Angels towards downtown. A Polish diocesan priest, Fr. Joseph Juszkiewicz, administered the parish.