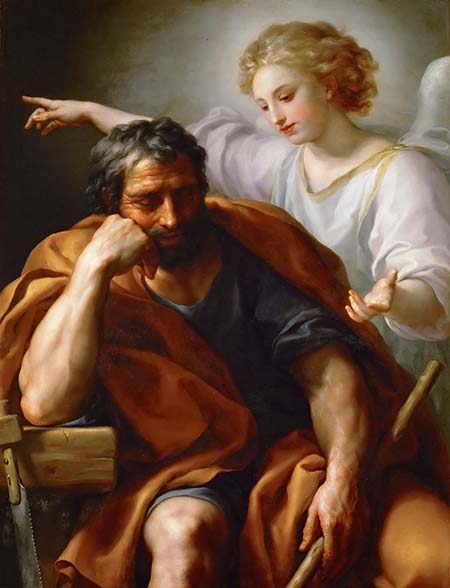 Fathers, do you want your children to obey you and to obey their mother? Really? Then all you should give them an example of obedience. If you obey God, his laws and commandments… if you obey your wife, anticipating her needs and requests, such that she doesn’t even have to ask… then your children will do the same, obeying and anticipating the needs of both mom and dad.

This is the example that St. Joseph gives us, obeying God and anticipating the needs of Mary and the child Jesus. As Pope Francis tells us:

As he had done with Mary, God revealed his saving plan to Joseph. He did so by using dreams… Joseph was deeply troubled by Mary’s mysterious pregnancy. He did not want to “expose her to public disgrace,” so he decided to “dismiss her quietly” (Mt 1:19).

In the first dream, an angel helps him resolve his grave dilemma: “Do not be afraid to take Mary as your wife, for the child conceived in her is from the Holy Spirit. She will bear a son, and you are to name him Jesus, for he will save his people from their sins” (Mt 1:20-21). Joseph’s response was immediate: “When Joseph awoke from sleep, he did as the angel of the Lord commanded him” (Mt 1:24). Obedience made it possible for him to surmount his difficulties and spare Mary.

In the second dream, the angel tells Joseph: “Get up, take the child and his mother, and flee to Egypt, and remain there until I tell you; for Herod is about to search for the child, to destroy him” (Mt 2:13). Joseph did not hesitate to obey, regardless of the hardship involved: “He got up, took the child and his mother by night, and went to Egypt, and remained there until the death of Herod” (Mt 2:14-15).

During the return journey, “when Joseph heard that Archelaus was ruling over Judea in place of his father Herod, he was afraid to go there. After being warned in a dream”—now for the fourth time—“he went away to the district of Galilee. There he made his home in a town called Nazareth” (Mt 2:22-23).

The evangelist Luke, for his part, tells us that Joseph undertook the long and difficult journey from Nazareth to Bethlehem to be registered in his family’s town of origin in the census of the Emperor Caesar Augustus. There Jesus was born (cf. Lk 2:7) and his birth, like that of every other child, was recorded in the registry of the Empire. Saint Luke is especially concerned to tell us that Jesus’ parents observed all the prescriptions of the Law: the rites of the circumcision of Jesus, the purification of Mary after childbirth, the offering of the firstborn to God (cf. 2:21-24).

In every situation, Joseph declared his own “fiat”, like those of Mary at the Annunciation and Jesus in the Garden of Gethsemane.
In his role as the head of a family, Joseph taught Jesus to be obedient to his parents (cf. Lk 2:51), in accordance with God’s command (cf. Ex 20:12).

During the hidden years in Nazareth, Jesus learned at the school of Joseph to do the will of the Father. That will was to be his daily food (cf. Jn 4:34). Even at the most difficult moment of his life, in Gethsemane, Jesus chose to do the Father’s will rather than his own, becoming “obedient unto death, even death on a cross” (Phil 2:8).  The author of the Letter to the Hebrews thus concludes that Jesus “learned obedience through what he suffered” (5:8).

If Jesus can learn obedience from Joseph, we can too!