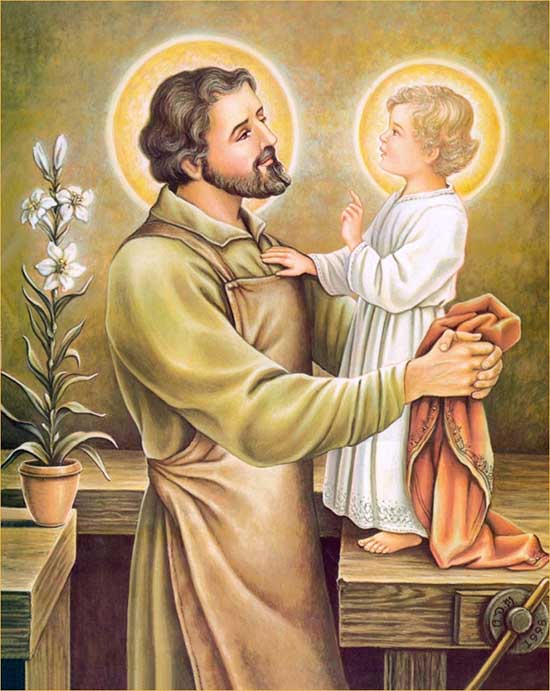 As we celebrate the New Year—a Year of the Family, a Year of St. Joseph—let’s reflect on Pope Francis’ recent Apostolic Letter, which teaches us how St. Joseph’s paternal service was key to our salvation:

The greatness of St. Joseph is that he was the spouse of Mary and the father of Jesus. In this way, he placed himself, in the words of Saint John Chrysostom, “at the service of the entire plan of salvation” (In Matthaeum Homiliae, V, 3).

St. Paul VI pointed out that Joseph concretely expressed his fatherhood “by making his life a sacrificial service to the mystery of the incarnation and its redemptive purpose. He employed his legal authority over the Holy Family to devote himself completely to them in his life and work. He turned his human vocation to domestic love into a superhuman oblation of himself, his heart and all his abilities, a love placed at the service of the Messiah who was growing to maturity in his home” (Homily, 19 March 1966).

Thanks to his role in salvation history, St. Joseph has always been venerated as a father by the Christian people… Innumerable holy men and women were passionately devoted to him. Among them was Teresa of Avila, who chose him as her advocate and intercessor, had frequent recourse to him and received whatever graces she asked of him…

Pope Francis also has a strong devotion to St. Joseph; he inaugurated his papal ministry on St. Joseph’s feast, March 19, 2013. In his Apostolic Letter he shared a prayer that he has been praying each day for over 40 years:

O Glorious Patriarch, Saint Joseph, Your power makes the impossible possible. Help in these times of anguish and difficulty.

Put under your protection the serious and troubling situations that I commend to you, that they may have a happy outcome.

My beloved father, I put all my trust in you. May no one say that I invoked you in vain since, with Jesus and Mary, you can do anything. Show that your goodness is as great as your power. Amen.

Pope Francis also encouraged us to use a short prayer, one that St. Josemaría loved, “Go to Joseph.” St. Josemaría asked us to put this invocation on a St. Joseph metal that centers of Opus Dei were to attach to the key to our tabernacles. We even do this on the tabernacle key we use here at St. Mary of the Angels.

In a certain sense, every father plays an essential role in bringing souls to Christ, because fatherhood is at the service of God’s plan for salvation, so let’s pray that all of us fathers fulfill that role well, putting our authority at the service of life and love in the family.

So, let us learn to love Jesus as did St. Joseph, and love the Blessed Virgin Mary as he did too.